PEOPLE who use a lot of sunscreen could be at risk of having “larger than normal” quantities of zinc in their bloodstream, with new evidence showing zinc particles penetrate the skin and are absorbed into the body.

Geochemist Brian Gulson, of Sydney’s Macquarie University, has provided the first conclusive evidence that zinc oxide nanoparticles – which appear in many translucent sunscreens – can be absorbed by the body and remain there for extended periods of time.

There is no conclusive evidence on what impact zinc nanoparticles have on the body’s cells or immune system.

However, long-term exposure to high levels of zinc can cause copper deficiency, which slows the body’s vital enzyme processes.

Professor Gulson, who presented the findings of his study into dermal absorption of sunscreen to the International Conference on Nanoscience and Nanotechnology in Sydney yesterday, said children and construction workers were most at risk of absorbing high amounts of zinc because of their “higher than average” usage.

Professor Gulson applied specially formulated sunscreen with “traceable” zinc oxide isotopes to 20 people of various ages, skin types and races over five days and took blood and urine samples from each. The zinc isotopes were absorbed into the blood and urine of every participant, and remained there for some time.

It was previously thought substances rubbed on the skin could not permeate its upper layers.

Professor Gulson said his findings were “significant” and urged cosmetic companies to “slow down” on the number of consumer products that contained nanoparticles.

Almost 400 sunscreen products sold in Australia contain nanoparticles in amounts ranging from 4 per cent to 30 per cent, the Therapeutic Goods Administration says.

Kylie Chisholm, 35, enjoying the sunshine on Perth’s City Beach with her 11-month-old son, Benjamin, yesterday, said she would take her choice of sunscreen for her son more seriously. “You’ve got to weigh up the risk of skin cancer and how much impact these particles will really have,” she said.

“This research would sway me into finding maybe a safer alternative if the one I was using wasn’t considered safe, but I would always be using sunscreen whenever we’re outside.” 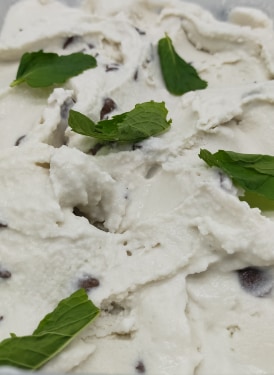 A refreshing hit of mint with the delicious crunch of the cacao chips - a perfect treat for the warmer months of the...